The Rod, The Reel and the Net on which Richard Walker caught the record Carp ‘Clarissa’ on September 13th 1952.

The story of how I have come to own these three iconic items goes back thirty years!

In 1991 Chris Ball who owned the rod, and Peter Rogers who owned several other historic coarse rods, brought them to our house so I could photograph them for an article I was writing.

Over the years we’ve all kept in touch with each other, meeting at various vintage tackle fairs and auctions, where the Walker rod and net were always discussed at length!

The next momentous occasion came about in May 2015 when Chris Ball and I were fly-fishing. About halfway through the proceedings, Chris expertly placed his fly close to some lily pads where a Trout had just risen. I was in mid-cast when he turned to me and said…”I’m going to sell the rod!”

My fly landed in the back of my hat! I mumbled something about wishing to buy it and, by the time we’d finished lunch, we’d agreed a price without me needing artificial respiration!

I should explain at this point, that I’ve been collecting vintage fishing tackle for over 40 years and my collection of vintage Carp and Avon rods now numbers around 26 examples, mostly made by B.James of Ealing who took over the production of Walkers Mk1V rods in Oct 1952. 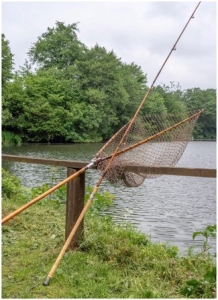 In May 2017, I invited Pete Rogers to come and fly fish the River Test during the May Fly season.

Our conversation as always came around to his ownership of the famous net that had landed the record Carp. It had been in his possession since January 1993, so I was delighted that on this occasion, he assured me that should he ever come to sell this historic item, he would always give me first refusal. The dream of ownership continued!

When we all assembled at Redmire Pool on 29th May 2018 to celebrate what would have been Richard Walker’s 100th Birthday, we brought together the rod and net for the first time since the mid 1960’s! 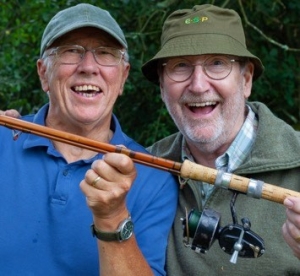 Then in July 2020, Chris Ball surprised me yet again with a phone call announcing that the Mitchell reel on which Richard Walker had caught ‘Clarissa’ had been found and was for sale. I visited the owner of the reel, who asked to remain anonymous, and after a very nice cup of tea and a pleasant chat, we agreed a price. Driving home I truly could not believe my luck!

Two down, one to go!

On Tuesday Oct 5th 2021 I called Pete to check if he intended join to us in September 2022 when we were all to be invited to Redmire Pool to celebrate the 70 years since Walker caught the Record Carp.

I never got to ask him the question because that very day, he had become a grandfather for the first time. Hardly pausing for breath he added“…and if you were going